What is domestic and family violence?

Domestic and family violence (DFV) is not limited to one group, culture, gender or sexuality but can affect family members and intimate partners right across our communities.

Domestic violence is considered a subset of family violence. It refers to violent behaviour between current or former intimate partners – typically where one partner tries to exert power and control over the other, usually through fear. 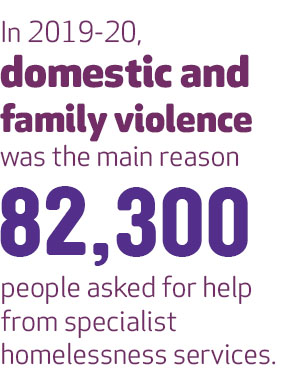 What are the different types of domestic violence and abuse?

Domestic and family violence is not always physical abuse. Often it includes different types of harmful behaviour. Knowing the signs can help you recognise abuse and allow you to take appropriate steps to intervene or find help. Types of domestic violence and abuse include:

Often the most visible form of DFV, physical abuse can involve direct assaults on the body, including use of weapons, driving dangerously, destruction of property, abusing pets in front of family members and forced sleep deprivation. Physical abuse rarely occurs in isolation and perpetrators can also inflict other types of abuse on victims.

Taking complete control of all finances, restricting another person’s access to bank accounts or using their money without consent is considered financial abuse. It involves controlling behaviour intended to make victims feel vulnerable, isolated and trapped in their situation.

While sexual abuse can involve strangers. majority of sexual abuse victims know their perpetrators. Sexual abuse in a relationship involves any form of sexual activity without consent, but it can also involve inflicting pain during sex, assaulting the genitals, coercive sex without protection against pregnancy or sexually transmitted disease, or using sexually degrading insults.

Attempting to control someone by isolating them from their friends and connections is a form of abuse. Techniques such as rudeness to family and friends, moving to locations where the victim doesn’t know anyone, or forbidding them from leaving the house can cause mental harm.

Words can cause as much damage to a person as physical abuse. Verbal abuse includes humiliating taunts either privately or publicly, verbal ‘put downs’ about person’s intelligence, sexuality, body image or value as a family member, parent or spouse.

Using religious teachings or cultural traditions to justify forms of abuse, denigration of a cultural background or denying access to religious ceremonies, land or family, is considered a type of spiritual abuse. This form of abuse maybe difficult to identify, as many victims may not realise they are being abused.

As many elders and children cannot protect or advocate for themselves, these groups of people are at risk of experiencing physical, financial, emotional or sexual abuse. Neglecting to care for children and elderly people is also considered a form of abuse.

Where can I get help?

If you, or someone you know is experiencing abuse or violence, it’s important to remember that it’s not your fault. There are support services that can help you.

If you are looking for support in your current situation, explore Mission Australia services near you.